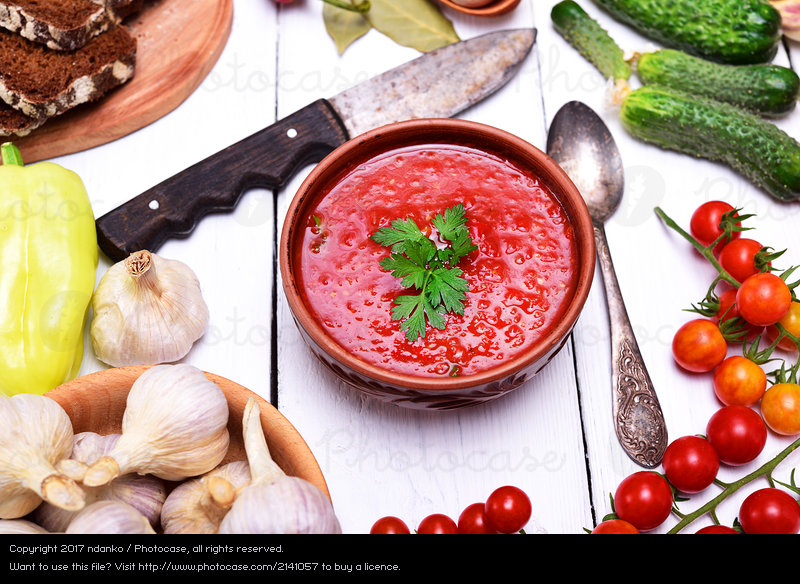 It gets very hot indeed in SW France. In June the temperature rises to 33-37 and often there are days of nearly 40. If we are lucky it is cooler at night but if the heat doesn’t drop for more than five days it is officially a canicule. A canicule is the French word for heat wave and comes from the Dog Star or Canis Major. Between 24 July and 24 August this star rises and sets with the sun and has always  been associated with a period of great heat. We also talk about the ‘dog days’ of summer for the same reason.

But a canicule now seems to come earlier and earlier and this brings me to what to eat when it is so hot. A chilled soup is a good answer and my favourite is Gazpacho. Made with lots of juicy tomatoes, or a tin of chopped toms, a cucumber, a green pepper or a jar of grilled mixed peppers in oil, several chopped spring onions, some red wine vinegar, olive oil, a little Worcester sauce, salt and iced water. Put it in the fridge for several hours, and then add ice cubes, chopped black olives and home baked croutons made from a stale baguette. You can feel yourself being cooled down as you eat it.

Another chilled summer soup is Vichyssoise, leeks and potatoes and cream, silky pale and elegant. It’s nice to add lemon grass and turn it into Thai Vichyssoise too.

A soup that I have made but one that is not chilled but works well in the summer is a French provincial recipe from Elizabeth David. Père Tranquille a soup made from lettuce, which the French think of as calming, especially when it’s cooked. Potage du Père Tranquille, Elizabeth David explains that he seems to have been a somewhat mysterious Capuchin monk, but the name … is also a reference to the supposedly soporific effects of lettuce.

And indeed Beatrix Potter wrote about that in The Flopsy Bunnies. She did not shy away from using long words for young children.

It is said that the effect of eating too much lettuce is soporific. I have never felt sleepy after eating lettuces; but then I am not a rabbit. They certainly had a very soporific effect upon the Flopsy Bunnies!

The Flopsy Bunnies simply stuffed lettuces. By degrees, one after another, they were overcome with slumber, and lay down in the mown grass… The little rabbits smiled sweetly in their sleep under the shower of grass; they did not awake because the lettuces had been so soporific.

Fortunately they do not end up in a rabbit pie. So soups can be calming and cooling and soporific.

And in this great heat of July and August 2018 we need all the possible ways of keeping chilled. 40+ is not much fun.

But in the 13th century there was a year known as the year without a summer.  In 1258 there was unseasonably cold weather, resulting in poor harvests, as there were also devastatingly heavy floods. The reason behind the cold summer was the massive explosion of a volcano in Lombok, Indonesia that would have created a 25 mile high dust plume. This would have an effect around the globe, blocking out sunlight and cooling down the planet.

Something to think about as we hide from the sun and seek shade.