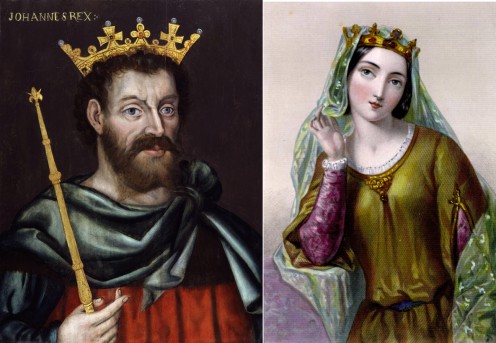 Isabella married twice and both her husbands belonged to families that believed they were connected to Mélusine, the fairy woman who was beautiful, full of magic and full of mystery. The Angevins, who became known as the Plantagenets, told the story of an early Count Fulk who had a wife who had borne him four sons. Gossip was that she did not go to church that often and when she did refused to take communion. One Sunday her husband snatched her cloak away as she left and she flew out of the window carrying two of the children with her. The two boys left behind carried her demonic blood and so the story of the Devil’s Brood or the Devil’s Crown began. King John was descended from her. The Angevins were certainly linked to a legend of a beautiful and powerful and faery lady.

The Lords of Lusignan

Isabella’s second husband Hugh Lusignan and his family believed that the castle they lived in had been built for them by Mélusine with ‘a mouthful of water and two handfuls of stones’. She had rescued a Lusignan lost in a nearby forest full of lakes and streams, lurking there with a suspiciously dead uncle. She helped cover up any wrong doing and agreed to marry into the family. Children were born, some with strange defects but all loved. She asked never to be seen in her bath but her husband spied on her and betrayed her and there she was with her serpent tail or mermaid body. So she left, flying high over the castle lamenting and weeping.

Here in this illuminated and most famous Book of Hours, the Tres Riches Heures du Duc de Berry, which was created 1412 to 1416 by the Limbourg brothers for their patron John, Duke of Berry. You can easily see a celebration of the first day of March. It shows the typical work begun in March – ploughing and pruning – with the Chateau of Lusignan in the background. This not the chateau that Isabella knew but a later one, complete with a slate roof and turrets and a clock tower.

In my books, Isabella heard the story of Mélusine in the weaving room for this was a tale told as women spun both threads and tales of magic. She was said to visit the chateau again whenever a child was born.

Excerpt from Part One

The stories of magic help from Melusine were told to Isabella as she learnt to spin and weave. The stories were whispered and woven into the tapestries, silky dragon flies and serpents to bear witness for ever. Isabella remembered them now as she waited in the Great Hall, her fingers tracing the patterns in the tapestries hanging on the wall, some rich and dark others glowing with bright silks.

As they had worked, Joan an old nursemaid told them the story, as it had been told and retold to women in the weaving room forever. Her voice was soft and sibilant, her hands stroking the woven cloth that lay across her lap.

‘Melusine was a water spirit, born to a fairy who had loved a King of the northern lands. Melusine was full of wise magic and left her mother’s house to live in the forest of Colombiers.’

Isabella listened carefully; Colombiers was nearby, full of streams and bogs, a perfect place for a water spirit to choose.

One twilight evening, while she and some of her fairy court were guarding the Fountain of Thirst, their sacred fountain, a young man, Raymondin of Poiters, stumbled upon them. He was lost and troubled after a hunting accident that had killed his uncle.’